As re ported earlier, the Federal Circuit in Vanda Pharm. Inc. v. West-Ward Pharm. Int’l. Ltd. held that jurisdiction exists under 35 U.S.C. § 271(e)(2) for a “late listed” Orange Book patent.  The Court also decided that an injunction is available to prevent inducement of infringement by a label.

The Federal Circuit held that the district court had jurisdiction over the 2014 suit on the ‘610 patent although the patent was listed in the Orange Book only after the ANDA was filed.  Vanda’s complaint alleged infringement on the ‘610 patent under 35 U.S.C. § 271(e)(2)(A) by West-Ward’s filing of the ANDA, which established the district court’s subject matter jurisdiction pursuant to 28 U.S.C. § 1338(a).  The Court explained that what is relevant on the jurisdictional issue is whether the complaint alleged infringement under § 271(e)(2), not whether the complaint asserted a valid claim, which is a merits question. Slip Opinion at 10.

Vanda alleged that West-Ward induced infringement of claim 1 of the ‘610 patent:

A method for treating a patient with iloperidone, wherein the patient is suffering from schizophrenia, the method comprising the steps of:

determining whether the patient is a CYP2D6 poor metabolizer by:

obtaining or having obtained a biological sample from the patient; and

performing or having performed a genotyping assay on the biological sample to determine if the patient has a CYP2D6 poor metabolizer genotype; and

if the patient has a CYP2D6 poor metabolizer genotype, then internally administering iloperidone to the patient in an amount of 12 mg/day or less, and

if the patient does not have a CYP2D6 poor metabolizer genotype, then internally administering iloperidone to the patient in an amount that is greater than 12 mg/day, up to 24 mg/day,

wherein a risk of QTc prolongation for a patient having a CYP2D6 poor metabolizer genotype is lower following the internal administration of 12 mg/day or less than it would be if the iloperidone were administered in an amount of greater than 12 mg/day, up to 24 mg/day.

Vanda claimed that West-Ward’s proposed label for the generic Fanapt® (which is substantially identical to Vanda’s Fanapt® label) is the evidence of West-Ward’s specific intent to induce a doctor to perform the steps in claim 1.

The Federal Circuit held that the district court did not clearly err in finding that the proposed label “recommends” performance of all the steps in claim 1, including performing a genotyping assay to determine whether patients are CYP2D6 poor metabolizers, and administering iloperidone at different doses depending on the results of the assay.

According to the district court, the claim recitations on determining whether the patient is a CYP2D6 poor metabolizer and the recitations on setting different doses in claim 1 were satisfied by the following statements in the “Pharmacokinetics” section of the West-Ward’s proposed label:

The district court also looked at the “Usual Dose” section which describes the doses as follows: 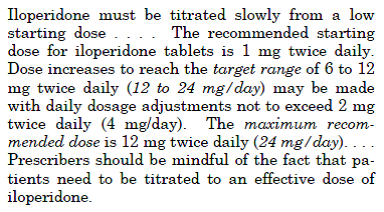 The above dose for the non-poor metabolizer in the label is slightly different from the recitation in claim 1.  The label recommends “the target range of” 12 to 24 mg/day and a maximum dose of 24 mg/day for the non-poor metabolizer.  On the other hand, claim 1 recites “greater than 12 mg/day, up to 24 mg/day,” and thus excludes 12 mg/day.  The Federal Circuit held that this did not compel a finding of noninfringement, as the label does not need to induce every doctor to infringe the claim.  The statement of the “target range” was sufficient to show West-Ward’s intent to induce infringement.  Slip Opinion at 25.

The Federal Circuit held that Vanda is entitled to the injunctive relief under 35 U.S.C. § 271(e)(4) which does not exclude remedy for the patent that issues after the ANDA filing date.  West-Ward argued that the district court did not have power to award the injunctive relief, relying on the FDA’s letter that approved a different ANDA for iloperidone tablets.  However, the letter only indicated that the 30-month stay on the ANDA approval was not available because the ‘610 patent issued after the submission of the ANDA.  Regardless of whether the 30-month stay is available, the district court may award injunctive relief under 35 U.S.C. § 271(e)(4) upon a finding of patent infringement under § 271(e)( 2).